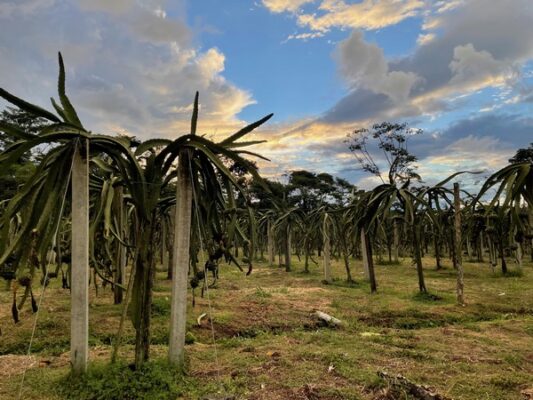 Weather and logistics pressure imported dragon fruit supplies in the US

Supplies of imported dragon fruit are less than anticipated.

White dragon fruit: This red skinned, white fleshed fruit is coming from Ecuador currently and peak season supplies began in November. “But they have been underwhelming. We have been supplied probably below 50 percent of what we were expecting during the whole season,” says Andres Ocampo with HLB Specialties in Fort Lauderdale, FL.

He notes there are a few factors behind this. The weather patterns have been changing and production has been lower due to those weather changes. “But that is compounded with the fact that it’s difficult to get reefer units to make the trip from Ecuador into the U.S.,” says Ocampo. “Logistics have been slower than normal to deliver containers and that triggers a delay in getting empty containers back to the countries of origin. Also because of high flower production in Ecuador, space was limited for most of January and into February because of Valentine’s Day. So mostly production hasn’t been where we expected it to be but the ocean containers have not helped either.”

That said, this month increased volumes are anticipated. “The next challenge is to make sure quality is good because the rainy season has already started and that may create some quality issues. We have to work closely with our growers to make sure that we have the right quality,” says Ocampo.

Yellow dragon fruit: This fruit, which is yellow skinned and also white fleshed on the inside, saw ample supplies in October and November. December saw a dip in production but shipments continued from the two different regions in Ecuador that continued supplying the fruit.

“January and February, we increased volumes again and now at the beginning of March, the production cycle is coming to an end,” he says, noting arrivals are scheduled for the next few weeks and then it moves into smaller, more sporadic volumes. “The next production cycle will kick in probably around May or June,” adds Ocampo.

While yellow dragon fruit only ships out of Ecuador, in the next few months white dragon fruit and red dragon fruit (red skin, red pulp) production begins in Florida--the season normally begins in May. Nicaragua and Mexico will also be shipping then.

All of this is meeting a growing demand for dragon fruit with more retailers interested in stocking the item. “And retailers are stocking these items on a regular basis, not only on promotional efforts when production is high and prices are convenient. But more like a regular steady program,” says Ocampo. While he anticipates demand to continue growing, concerns that lie ahead are a pandemic-related downturn in the economy, and geopolitical events such as the Ukraine-Russia war.

As for pricing, increased costs on production inputs continue to pressure pricing. “It’s been complex to handle because ocean freight has gone up by at least 50 percent since six months ago. So we’re trying to keep pace with those increases but there’s obviously only so much you can push. There’s always a balance you have to strike between how much you can push and how much the customers are willing to pay. Especially for relatively new items into the shelves,” he says. “It gets challenging. We are wary of what’s going to happen in the remainder of the year in pricing and logistics.”