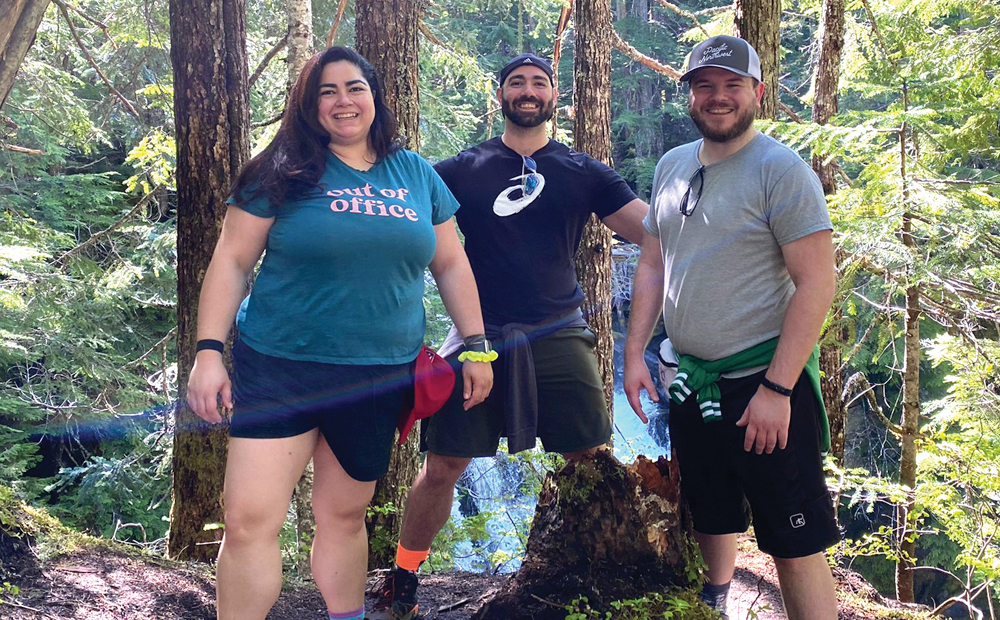 “I love my company.”

“I love being in sales.”

“I love the weather here. People say it rains every day. They are lying. In Puerto Rico, it rains more.”

The list goes on and on. Arroyo punctuates almost every sentence with her love for her family, her career, her upbringing, her current situation, the products she sells, her clients and basically everything about her life.

She is currently in sales with HLB Specialties, which has its headquarters in Fort Lauderdale, FL, and is a tropical fruit specialist. She joined the company in early 2019 in sales support, but quickly moved into a sales position. During the pandemic, when everyone was working remotely, Arroyo and her boyfriend, who has since become her fiancée, moved to Tacoma, WA, because he was transferred. “I love it here. I love working remotely. I miss being in the office, but I focus more here. I get up every morning at 4 a.m., get ready for work and jump onto the computer by 5 a.m., which is 8 a.m. on the East Coast.”

Working from East to West with her clients as they start their day, Arroyo said that her day is often still going on as her West Coast clients reach their 5 p.m. closing time, but she doesn’t mind it at all. In fact, that was the discussion that sparked her outpouring of love for her company.

Arroyo’s journey began in Puerto Rico 30 years ago — she turned 30 on March 21. She grew up in a large family with total family involvement. Her mother was a school teacher so her grandparents, who lived a more rural existence amidst many fruit trees, were a constant presence in her life. “My nuclear family numbers 12 including me: grandma, grandpa, two aunts, two uncles, one brother, mother, stepdad, two little cousins. My dad passed away three years ago,” she said adding that the extended family numbered 80-plus cousins.

She grew up in the city of Mayaduez, which is located on the West Coast of Puerto Rico and claims about 80,000 residents. After high school, Arroyo attended and graduated from the Inter American University of Puerto Rico, where she first studied restaurant/hotel management but received her degree in marketing. The restaurant direction was her childhood dream, and still occupies that spot in her head and heart. “My dream was to own my own restaurant from the time I was nine years old. It is still my dream for when I grow up,” she quipped.

Arroyo is not particular about the location but wants to specialize in Puerto Rican cuisine and introduce more mainland Americans to the dishes of the island of her youth.

While in Puerto Rico, she also armed herself with a number of certificates of specialized training, including one in event planning and management. In 2016, Arroyo moved to Florida and worked in event management for several years.

It was early in 2019 that she applied for a job with HLB and became acquainted with President and CEO Homero Levy de Barros. “I like to say he discovered me,” she said. “He interviewed me three times before hiring me in sales support in May of 2019. He is the reason I am in the produce industry.”

Growing up with a love of food and working in the bread industry in Puerto Rico before coming to Florida, Arroyo believes she had the base skills and knowledge for a food industry career. “I just had to learn this industry.”

That she has. Within about three months, Yessenia became a member of the sales team and has been moving full speed ahead ever since.  HLB works on a client basis, so Arroyo sells her book of clients all of the products HLB handles, ranging from dragon fruit to rambutan and including papayas, avocados and a host of other tropical items. “I have clients in the East, Midwest and West and in eastern and western Canada. My goal is always to meet nice people who want to do business with me.”

Arroyo admitted to being an extrovert, but also prides herself on being in tune with her clients and adapting to their particular way of doing business. She said some like to talk on the phone for an hour, which also appears to be her preference, others want a quick email. “I am dedicated to my clients and treat them how they want to be treated. I am an extrovert, but I also adapt very easily.”

She believes growing up in a large family and working in the face-forward event planning world gave her a great foundation for the people-oriented produce business. “Growing up, everyone thought I should be a lawyer.”

While Arroyo admitted to working long days, she also takes time out for herself for several pursuits. “I love to cook,” she said, adding that many Puerto Rican dishes tend to include rice and beans, often served with steak or chicken. She was hard pressed to pick a favorite dish, but she finally mentioned arroz con gandules, which translates to rice with pigeon peas and pork. “Pigeon peans are like a small green bean,” she explained.

Arroyo and her fiancée also have a love of the outdoors. “Growing up in Puerto Rico, I was attracted to nature. I love the coast, but I also love the mountains.”

She admitted that Washington’s climate and cold coastal waters doesn’t allow for a lot of swimming in the ocean, but the state has plenty of mountains and seemingly unlimited trails. “We go on a lot of hikes, and I have become more bicycle friendly.”

For example, in July they spent a weekend visiting lavender farms on Washington’s Olympic Peninsula. “I love taking mini-road trips,” she said, noting that imposing Mount Rainier is one of her favorite spots.

She does admit to missing Puerto Rico every day. “Mostly I miss my family, the free time I had growing up and the community, but I love it here. My fiancée’s whole family is here, and they are soon going to be my family.”

Though Arroyo would like to have her own restaurant, her current goals are more immediate. “My goal is to grow my sales and sell more produce for HLB, and I want to meet all my clients. So far, I have met about half of them personally. Every day, I dedicate time to my clients. I love my clients,” she said, characteristically.